“Nihari comes from the Urdu word nihar which originated from the Arabic nahaar, meaning day,” said Jehangir Alam from Aminia. Small wonder then that handwritten signs outside the restaurants read: “Nihari available, 5 am-8 am”.

“Nihari involves the slow cooking of meat with the stock in large vessels, sealed with dough. Since the meat is cooked overnight over slow fire, these vessels are called shab deg or overnight vessels. About 50 different varieties of spices are used including the usual garam masala, cumin, cardamom, cloves as well as a special type of sea foam,” he said.

Though Nihari can be made of mutton and chicken, Jehangir says that it tastes best when cooked with beef shanks. “Since the nihari involves a cooking time of a minimum of six and a maximum of 8 hours, lamb or chicken would easily melt.”

Maybe this shouldn’t be my dish to cook. My memory of it comes as a simmering fever dream…

I am not from Delhi, I am not from Lucknow. I am not Muslim, I do not perform namaz, or listen to the call to Fajr at dawn. This is not my origin story – not in any direct sense or experience – these dishes and the people from whom nihari is an axis of nourishment, and their establishments are mine – ours – to guard and protect in the communities where we live, whether out of a guiding love for my neighbor and the transformative journey that may have brought her to a new life here in America, or out of some stubborn, deeply seated drive to eat everything.

But this is nihari, formerly the meal of kings, now the dish that Delhi (or New Jersey, or Lincoln, or wherever you are) wakes up to.

Thanks to a welcoming Sunday buffet at Edison’s Shezan, New Jersey’s classiest Pakistani restaurant (their words, not mine; I don’t have much to go on, having gone to this one place only a handful of times before leaving NJ for MA), I have sipped of the rich, oil-golden, piping hot dhows of beef in chilified gravy called nihari.

My first nihari would be a singular experience for me, up there with cizbiz in Baku, shucking uni and inhaling dank estuaries welled up within; the eaters’ high of Sichuan braised pork intestine in Flushing; gopchang with my friend Sang Yup on the day Johan Santana pitched the Mets’ only no-hitter; and, century egg and pickled pig ear with my Shanghainese ESL students. I wouldn’t enjoy cizbiz until several months later while studying in Azerbaijan – I’ll write separately about that experience and share my favorite recipes in a forthcoming companion post.

So one afternoon in late February, 2013, I decided to raise the mantle of beef nihari.

I never wrote down the recipe. I only recall the end result, and the passing of time – the fantastic voyage of meat, spices, and garlic in the overnight vessel.

I couldn’t have overcooked it. 14 hours in the slow cooker on low, and it rivaled what I tried at Shezan.

Yet fluency cannot be achieved overnight – and me, I never bothered to attempt the script. I couldn’t even pass this recipe down orally. So here we are, left with this assemblage, this reconstruction – gestures and traces.

A better recipe than this would be: prepare a table with an oil-spackled linen cloth, pre-wear the edges of the table to the following specifications – two 5 millimeter deep concave bowls, 4 inches wide and 8 inches apart; treat with light wax to give the impression of where two sweat-streaked forearms would rest while consuming this fireball stew, day in, day out for years.

Now, in March of 2016, as I look at these pictures and pore over these blogs, read these sorts of things:

“Soon, a metal dish of nihari clattered onto the tabletop, an unattractive brown sludge studded with marrow beneath a translucent layer of red grease that seemed, in my already overheated state, more like a warning than an enticement.”

…I hear my grandmother from Brooklyn – I must have been seven years old – putting on a dismissive tone over dinner talk and passing on a dish cooked with that fatty yellow offal, chiding my grandfather for “slurping the marrow right out of the bone.”

And the wrong words make you listen, don’t they? This is my Brooklyn, oral Brooklyn, Brooklyn of my parents and their parents and even their parents, a carnival of barking tongues, mouths that let loose a torrent of stevedores’ oaths and let in a tidal swell of off-fall. The mouth of a hungry cab driver at midnight. That Brooklyn mouth, the pitch-black start to such a rare animal, with a Roebling spine, the humours of Whitman, and a Bensonhurst pouch of  ancient kopecks and ḥanukah gelt  for a belly.

How couldn’t I suck the marrow right out of the bone? That sound is part of the story – how dare we gloss it over?

And I think, it’s been so long. And I’ve got to write it down but I’m still getting educated. And it won’t be forgotten. Because I’ll never say anything nice again…how can I?

Enjoy it, when shank and bone cook for fourteen hours overnight and turn to erosion.

Ingredients for the garam masala mix; I just used store-bought garam masala in gratuitous amounts plus pretty much everything you’re about to read, but, My Kitchette offers the following list of aromatics to blend if you prefer a more grind-it-yourself ethos:

For the nihari, proper:

And finally, for the tempering:

…I have absolutely no memory of the method I used to prepare this dish. Would it be so wrong of me to say I just chucked it all in the overnight vessel, closed the lid, went about my evening and sleep routine, woke up and tempered some onions and garlic in a quarter stick of Land O’ Lakes butter (not ghee, for shame), tossed it into the memory pot and ended up with this? 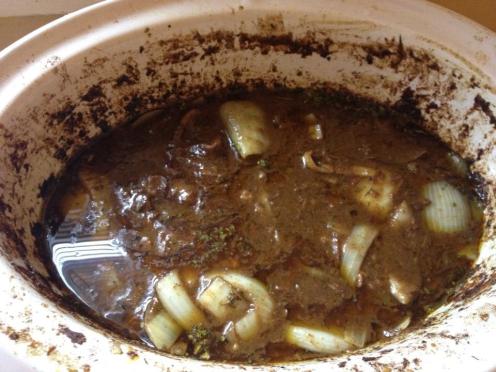 Thirteen hours later, the beef nihari is a richly phased cauldron of fatty goodness, savory morsels, and golden dhows of ginger and garlic floating on it all. 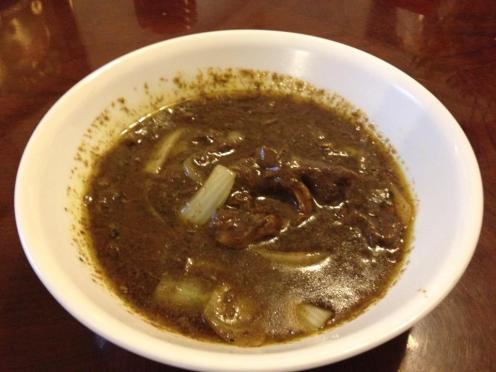 No words. Noises of delight. Just no words.

I’ve really got to do a better job of keeping a recipe book on hand.

In lieu of a more comprehensive method rundown, here’s a diverse list of nihari recipes, including one with trotters:

Enjoy, and as always, comments are welcomed and encouraged!

2 thoughts on “The Fantastic Overnight Voyage of Beef Nihari”