Following up on my recent post about the (oft-maligned) gose, here’s the first of two weekly posts showcasing some of the tarter stylings of beer I’ve sampled – we’ll start with the Berliner Weisse.

Berliner Weisse, the yogurt of beers from the European capital of ayran.

Lactobacillus on a breezy Spring afternoon, with alcohol concentrations low and fizziness high? Time for a drinking spree…on the Spree!

And yet…there’s talk around the house of possibly visiting Berlin this summer, for my second time? Boy that sounds swell!

Here are some of my favorite Berlin weisse-style beers, freshly picked from the darkest archives.

I can’t read. Sour smoked wheat ale? That’s some jumbled up pop there. This is the single most unique beer I’ve tried. Intrigued by the East Prussian story on the bottle, I’m inspired to create a blog about beer irredentism. The first post would cover claims to the title of “best Kurdish beer.”

Ah, the old smoked sour patch kid! Something that could only exist as a notion or trace of a notion in the universe of Beer. Tart, Prussian, a complex devil of a Weisse.
Prosecco dolled up in bond paper. Starts with a flash of lemon, ends with a taste like a common Deutschmark. But I’m not disappointed — surely, the average stockholder’s note goes through such a spectrum of crispness. For actually *tasting* that? 10/10.
What a lovely day! WHAT A LOVELY DAY! A beer custom-made for headspace on the repurposed post-industrial inlets of Boston Harbor. I miss those late Spring / early Summer afternoons along the Mystic…
Bag a’ bottle a’ salt n’ vinegar chips. Leaves my cheeks drawn in like Georgian dumplings.
Local, out of Haverhill. While the finish is a little bready, the overall impression is of something like a beer lover’s sour mimosa. A big score for under four bucks a bottle – tart’s in this (that) July! 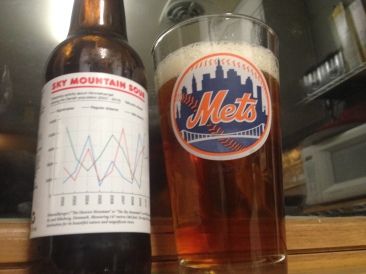 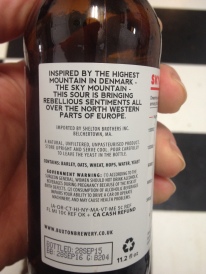 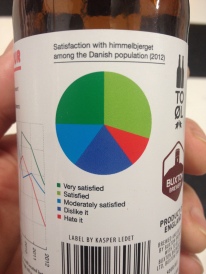 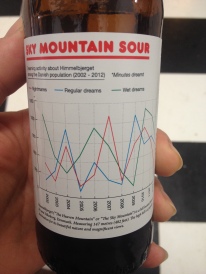 Verse three.
And as above, so below. Or something like that: Sky Mountain Sour (from Belgium’s De Proufbrouwerij, in collaboration with Buxton Brewery – poured circa March, 2016), with some innovative labelwork. Not sure the origin or grounding of this Berlin-style appelation, so I’ll go ahead and imagine the three localities involved in the production and branding of this beer are all united by their distance from and absolute height (topographic; theo-relative?) vis-a-vis the Doggerland Hills of the early Mesolithic. Tart, almost to the tooth. Would the beer copy gods accept the use of al dente to describe the tooth-scraping tap of lactic acid? Sky Mountain Sour’s a nice surprise for the book-for-cover beer drinker in all of us.